Chingri macher malai curry is a traditional bengali dish where chingri mach is cooked in coconut milk with garam masalas. In our bengali language chingri maach means prawn or shrimp and malai is commonly known as cream but not that common milk cream, it’s coconut’s milk cream. Though medium to giant size prawns can be used for making this bengali recipe but to get the best result must go with golda chingri. This delicious golda chingrir malakari already secured its place in bengali’s new year to jamai shosti menu for its appearance.

For making this chingri macher malai curry recipe you may use bagda chingri or tiger prawns too. My mom is my inspiration for making this recipe. As I’ve seen my mom to cook this malaikari with Golda chingri only. Here, I’ve not used tomato as my mom says, in an authentic bengali style malai curry is prepared without tomato. So I’ve used curd instead of that.

Though chingri is an bengali term but the malai or curry no one exists in our bengali language. Then I also accept it by thinking that the word “malai” might be aquired from coconut milk and the “curry” part this prawn recipe might come from bengali term tarkari. Though as per my knowledge, soft flesh of tender coconut is generally considered as coconut cream (not the coconut milk of dry coconut) inIndia. So I imagined, in olden days people might have used tender coconut cream or malai and nowadays that’s not easily available and people replaced it to the coconut milk. Which is quite possible as we Bengalis have a similar recipe, Daab chingri where tender coconut is used for its malai or coconut cream.

Later I was surprised to hear, this malai curry recipe originally comes from Malaysia and it’s actually “Malay curry” not “malai curry”. Though I don’t have any clear knowledge, where this recipe actually comes from, only as per my knowledge for the making of any Malaysian curry coconut milk is an essential ingredient. So still I’m in dilemma, it’s really a part of traditional Bengali cuisine or Malaysian cuisine.

However, Let’s the argument goes on, and we foodies should concentrate on its taste rather than its origin, am I right?

Here for your convenience, I’ve explained how to clean the golda chingri before making this bengali style prawn malai curry recipe. I kept its shell, blue legs, and head intact, though remove its small legs, antennas, eyes off, devein it and remove its dirt part(actually stomach) from its head. Then clean it thoroughly with water and use it in this recipe.

Even you may check other Bengali prawns recipes from my website,

Try this bengali style giant prawn malaikari in your kitchen with step by step pictures. And please let me know your valuable feedback by writing it down in the comment section below.

How to clean the golda chingri 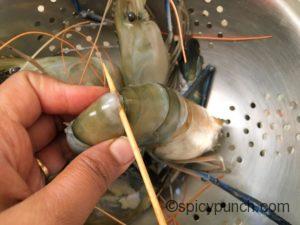 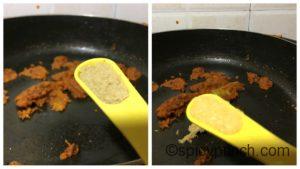